Long Term Implications of HSR on Small cities: Ciudad Real and Puertollano revisited 25 years after the arrival of the HSR 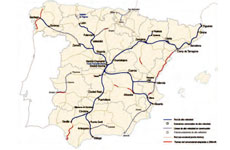 Up to 10-15 years after the arrival of the HSR to two small and isolated Spanish cities a considerable amount of studies about the territorial and urban impacts/implications of HSR were done based on the cities of Ciudad Real and Puertollano. Their distance to major cities (at least 200 km to any cities of more than 100.000 inhabitants) made it easy to try to isolate the impacts/implications due to HSR from those derived from other reasons.

The paper does the same analyses that were undertaken 15-10 years ago, to evaluate those implications/ impacts that have been consolidated on a greater long-term perspective and those which have changed and/or disappeared (less permanent more variable).

The two conclusions derived from revisiting these analyses undertaken 10-15 years ago in these two HSR cities show that:

The change in growth tendencies produced shortly after the HSR arrival:

The projects/strategies being developed 10-15 years after the HSR arrival can be classified in the long term into three groups: