Habitability and accessibility criteria in the design of passenger trains 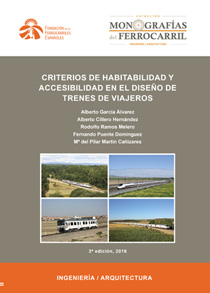 The main objective of this publication is to establish some parameters that contribute to improving the quality of rail service, defining indicators which directly affect passenger comfort, such as habitability and accessibility, in order to evaluate how rolling stock adapts to the needs of operators and passengers.

The study is focused on passenger trains (both railways in a strict sense as well as metropolitan railways, light rail vehicles and trams), without other possible uses of the train like transport of luggage and packages, of cars, etc., being excluded from the corresponding analysis. As far as the travelled distance is concerned, research covers all types of daytime rail passenger transport; that is the ones that are operated in the intercity area (with a special mention of high speed), and the ones happening in medium distance, suburban and urban surroundings.

Although the area of operation has not been limited so that conclusions can have universal validity, reference data are Spanish cases. Also included are some references and comparisons with other modes of transport such as the plane or the bus, both because of the similarity of the problems to be solved and the possible usefulness of the standards and studies carried out on them, and because of the fact that they are modes of transport competing against the railway and at the same time they complement it.

This document is part of the Report of the “Methodology for the evaluation of the performance and efficiency of passenger trains” research project, promoted by Fundación de los Ferrocarriles Españoles and which in 2008 was awarded the VIII Talgo Technological Innovation Award (the highest award in the Spanish rail sector). In 2015 it has been adapted according to the 2014 Technical Specifications for Interoperability.