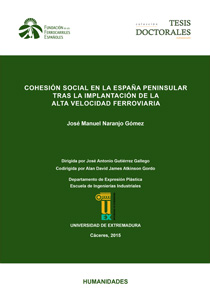 The connection of all the Spanish peninsular provincial capitals through high-speed rail lines covered in the 2012-2024 Plan for Infrastructure, Transport and Housing involves a large expansion of the high-speed rail network in Spain. This expansion has as one of its main objectives to achieve greater social cohesion in the Spanish territory. For this reason, the developed methodological proposal stands out for effectively characterising the social cohesion that will arise in the Spanish peninsular municipalities before the construction of the new railway infrastructures. To this end, those municipalities that will improve or worsen their social cohesion after the construction of the new high-speed corridors have been classified and identified. In order to do this, indicators of structural backwardness and territorial potential accessibility are used, illustrating the results with GIS tools. The results show vaguely defined territorial patterns regarding the positive or negative effect of the new infrastructures, highlighting many municipalities with geographic and demographic disadvantages that would not improve their situation. The methodological proposal effectively characterises the social cohesion before the construction of the infrastructures.